The first time I watched Goodness a play written by Michael Redhill and directed by Ross Manson, I laughed and cried within the same moments. I was seated on the main stage at the Butare University  theatre hall where the play had been set to performance as part of the Festival Arts Azimut  in 2009. Seated all around me were other students and art lovers who equally found a language for the experiences of genocide that they had struggled to express. 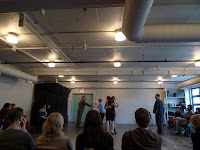 Goodness transported me to Northern Uganda and the countless newspaper reports of people talking offhand most of the time, about a 26 year old insurgency that they do not know about, mirrored by the first hand accounts I had heard and experienced while working there. Who are we really to attempt to tell their story? The absence of guilt or remorse by most of the perpetators is what disturbs me the most.

Goodness reflects the mindset of an active participant in the murder of Jews in the embodiement of Mathias Todd, an intellectual who led people to kill thousands through his philosophy of "preserving our own". Years later, he is set to stand trial but his lawyer pleads for his release based on his illness of  Alzeimers which renders him unfit to stand trial. 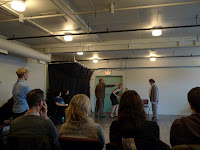 Similarily in September 2011, a court in Uganda ordered the release of Thomas Kwoyelo one of the commanders of the Lord's Resistance Army (LRA), ending the country's first war crimes trial. Thomas Kwoyelo had been charged with 53 counts of murder and other crimes.The constitutional court said he should be given an amnesty in line with other LRA rebels even if at least 30,000 people died as the rebel movement spread terror in northern Uganda for more than 20 years, displacing some two million people. This rebel group is notorious to this day  for kidnapping children and forcing the boys to become fighterswhile using girls as sex slaves.

Anyway, I met the team of Goodness and somewhere along the way of my soapy rantings about war, justice and how I employ my writing to advocate contemporary gender issues and justice for war victims, we struck a friendship and promised to collaborate on a project or two somehow with Ross Manson, the director of Volcano Theatre. Two years and five months later, I arrived in Toronto Canada to assistant direct the remounting of the show Goodness as it goes on tour in Canada.

Many things about the level of arts and theatre management here struck me. I shall attempt to explore them in consequent posts about my experiences, beginning with the Tarragon Theatre. I was invited to watch The Golden Dragon by Roland Schimmelpfennig translated by David Tushingham and directed by Ross Manson  at the Tarragon theatre. The Golden dragon is set in a restauarnt at which diners sit savouring their meals, while the kitchen staff rally to hide a young illegal immigrant who is desperately searching for his lost sister. Little does he know the key to her disappearance might be only a few tables away.

The play was set , so that they had the audience on either side of them to reinforce the experience of  the bustle in the resaturant. By the way, props here are the real thing: Not tables that shoud be tables but, will pass for a table because it is being used on a theatre stage..... So, ignore the jagged edges and roughly assembled pieces..

Three actors and one actress alternately played the different characters that make up the play with a precision that I envied.I was struck by the quality of actors and actresses before me and wondered how they get to this level. Is it the director archiles heel or the individual artists, or is it a collective effort  that delivers great theatre experience. Would my preceeding days at work help me to answer these questions?

At the end of the performance, Ross invited me for celebratory drinks with the cast including; David Fox, Lili Francks, Tony Nappo, Anusree Roy, David Yee to mark the end of a successful run of the play. Snippets of their lives beyond the stage escaped into the air as they shared their reactions to media reviews of them .

Is it a good idea for an actress or actor,or even the director to read show reviews while the show is still running? To this , allow me add a link to what my opinion might reflect through Ross Manson.

The subsequent question left to answer being wether or not we, as arts directors, should allow media to pass the final verdict on our work. I shall speak more about how actors and actresses earn their daily bread with acting as a career profession. And, also about the technical side of theatre the way I experienced it. For now though, I have some sleep to catch and a new day and experience to prepare for.